Surface fishing, zigs, stalking, margin fishing...Woburn Sands has it all, with some incredible carp lurking in its depths.

This has to be one of my favourite waters for stalking. The water is gin clear and they feed right in the edge.

The Woburn Sands pit is a hidden gem amongst the housing estate.

Don’t let this put you off, though, because you’d never know it once at the lake.

It is lined with old trees, lush, green, grassy banks, a real carp anglers paradise and a water that has me returning every year for a dabble.

You’ll need these for your trip to Woburn Sands 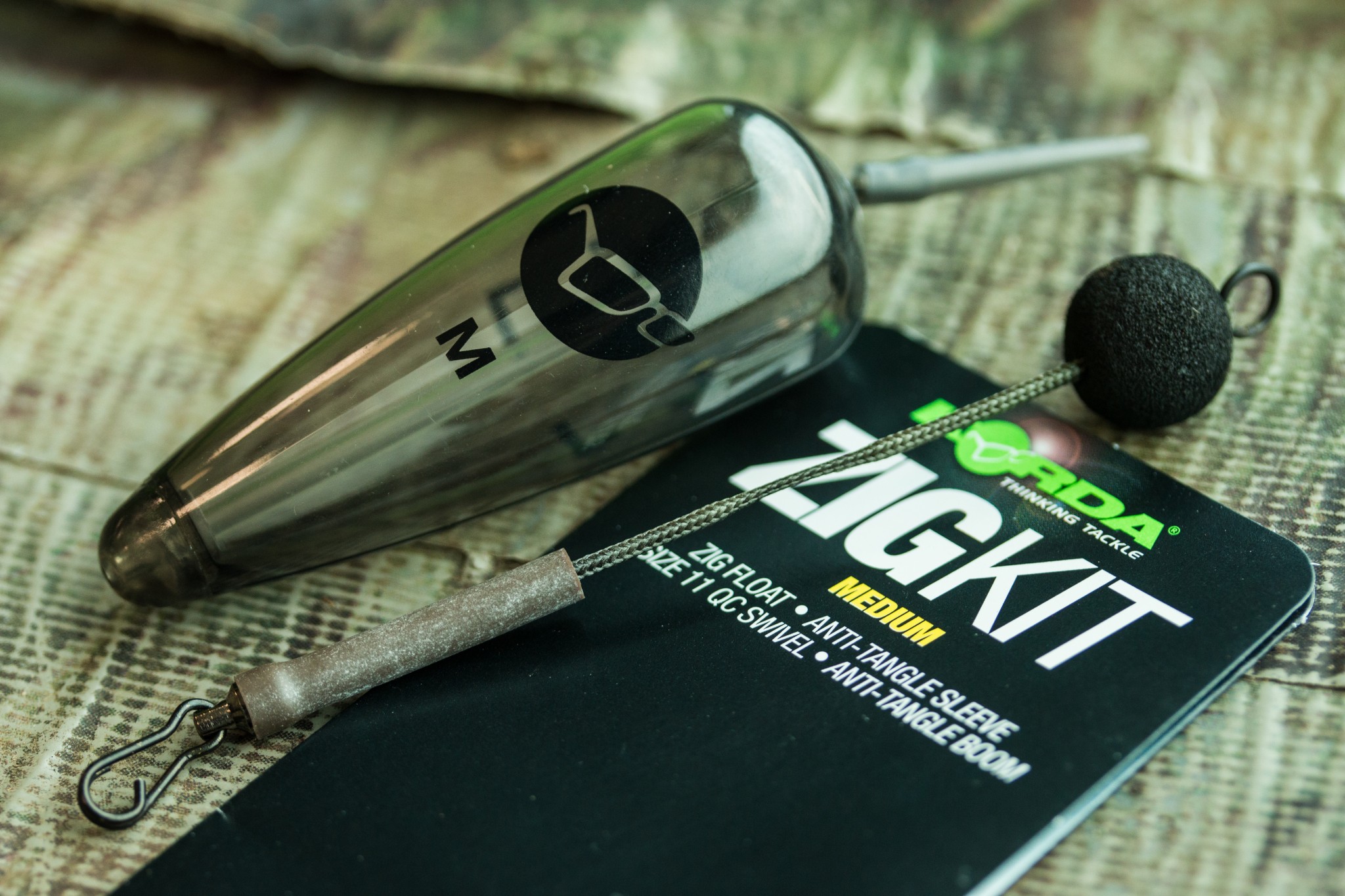 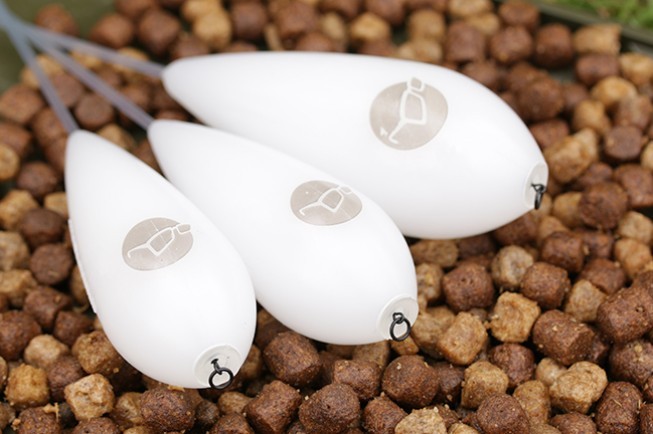 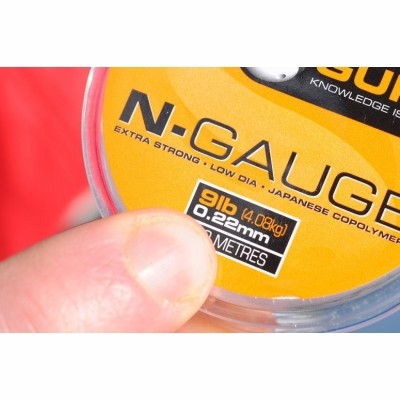 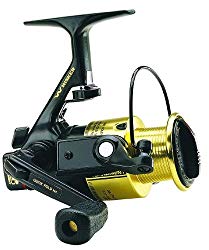 It has been targeted over the years by some of the best carp anglers that have lived.

Many have used it as a stepping stone to tricky, reputable waters such as Elstow, Taplow and other incredible, respected lakes.

The Woburn Sands pit is a hidden gem amongst the housing estate.

Don’t let this put you off, though, because you’d never know once at the lake. It is lined with old trees, lush green, grassy banks, a real carp anglers paradise and a water that has me returning every year for a dabble. 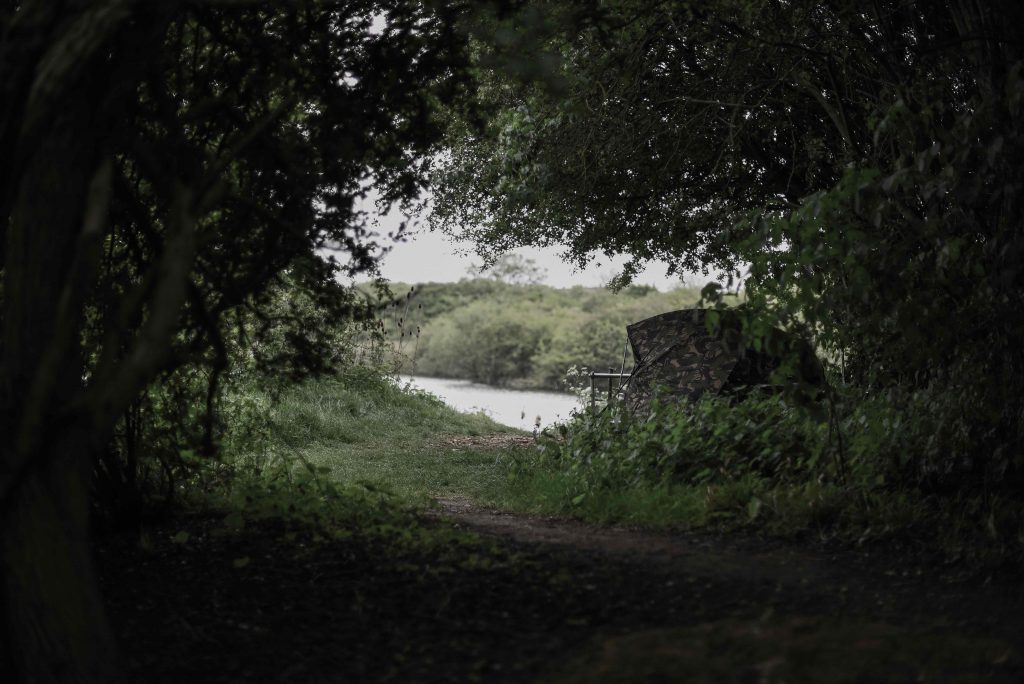 "NEVER leave home without your floaters in the warmer months."

What does the lake hold in terms of features?

Woburn is only a few acres in size, making it very intimate. That said, what it lacks in size, it certainly makes up for in depth. It is a very deep, clay pit, rich in naturals with fresh weed aplenty.

Silkweed covers much of the bottom, but there are plenty of clear spots, which can be easily identified via the marker float and lead.

The water is gin clear, so when the sun is high, you can sometimes notice the glowing clear spots up to 10yrd from the bank.

These can be real hotspots on the notoriously deep lake because they are located right on the marginal drop-off – an area the carp love to feed on.

A few handfuls of particles at regular intervals will keep these clear and the carp frequenting.

Many of the margins are tree lined, with some notable snags at the far end of the pit. In the warmer months, you will always find carp seeking sanctuary here.

Conceal yourself behind the trees, creep up to the snags, and through the lenses of your polaroids peer through the branches.

More often than not, you will see those dark, black shapes, moving in and out of the snags. There are swims either side, which make great stalking spots.

Fishing in the swim known as Rats also gives you the opportunity to fish a rod long, over towards these fish holding snags.

I have caught many carp doing this, casting my rig against the snags and walking round to bait up by hand. You can see everything that is going on which provides heart-stopping angling at times.

The swim Clarkies and many up that end boast dense Norfolk reeds which once again provide a very effective feature at the right time of year – generally, the spring and prior to spawning.

Quite often you will see the fish moving in and out of the reeds so a hook bait placed nearby has a good chance of being snaffled.

In Clarkies, there is also a shallow plateau which allows you to wade baits into position. I have caught many a carp off the end of the reeds by placing a bait just on the drop off.

Be careful, though, as it shelves off quickly! 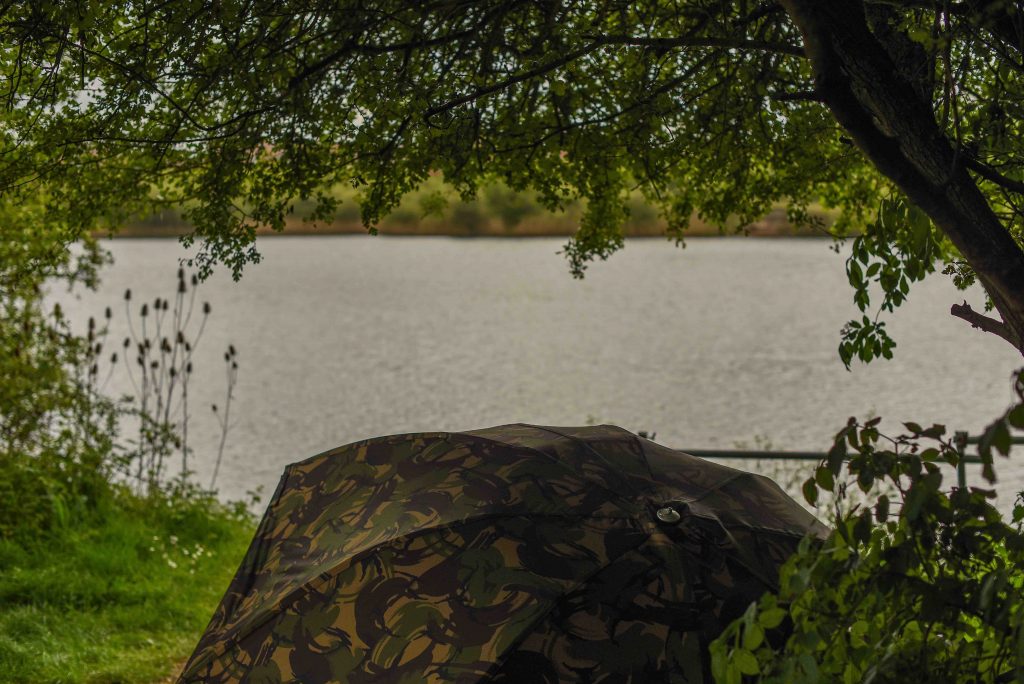 Woburn once held some very old carp; Scaly and Rosie to name but a couple. Unfortunately, as the years have gone on, they have slowly diminished, but a few originals still reside. Vauxhall Angling Club have stocked the lake however to ensure the future of this amazing fishery.

A few years back they introduced a load of beautiful scaly fish and some have flourished in the rich environment. One of the stockies is now king of the lake at well over 30lb – a fish known as The Shovel.

There are also some amazing commons as backups which go mid twenties. You know when you have hooked one of these because they fight incredibly hard in the deep, oxygenated water. 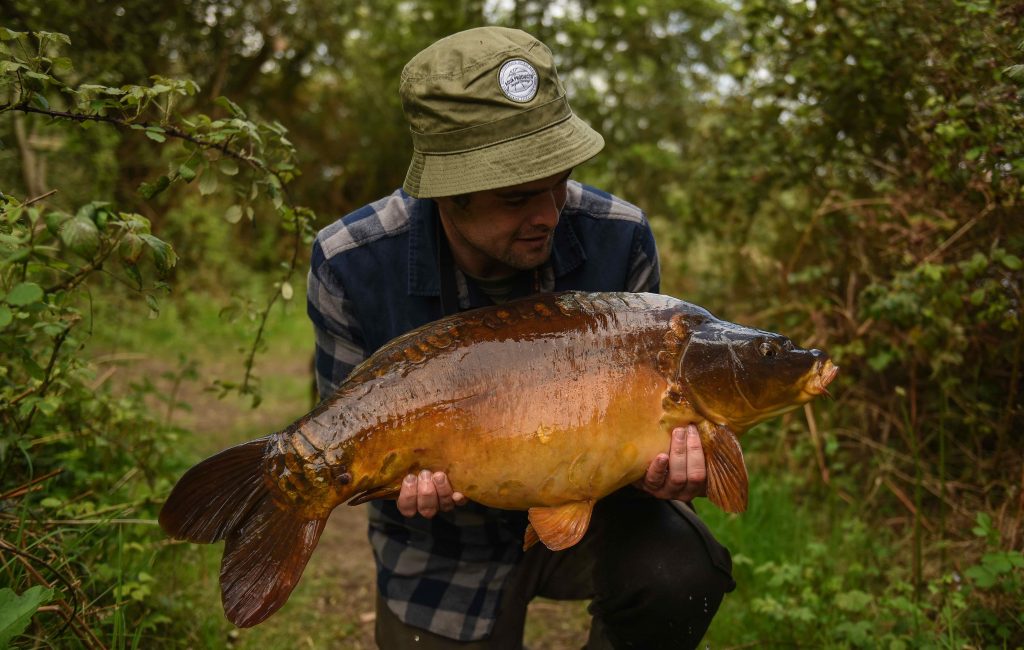 They Love The Margins

Most methods will work at Woburn but one of my favourite approaches is stalking in the edge or margin fishing at the bottom of the shelf. Food congregates here and so the carp are rarely far away.

As the first spring rays set in, I like to take a wander over to Woburn because I know that they will be seeking the marginal slopes to feed.

There is nothing like watching your target fish feed.

There are certain areas on Woburn that you can almost guarantee will hold fish in the warmer months; the snags on Rats being one of such areas, plus the snags between Rats and The Flat Bank.

There are many little nooks and crannies that you can sneak a short stalking rod into.

I like to bait up a few different areas at the beginning of my session, a few handfuls of hemp, particles and boilie crumb, then keep checking to see if the fish have been visiting.

Due to the clarity of the water, you will often see the fish feeding. Take a pair of polarising sunglasses to help. 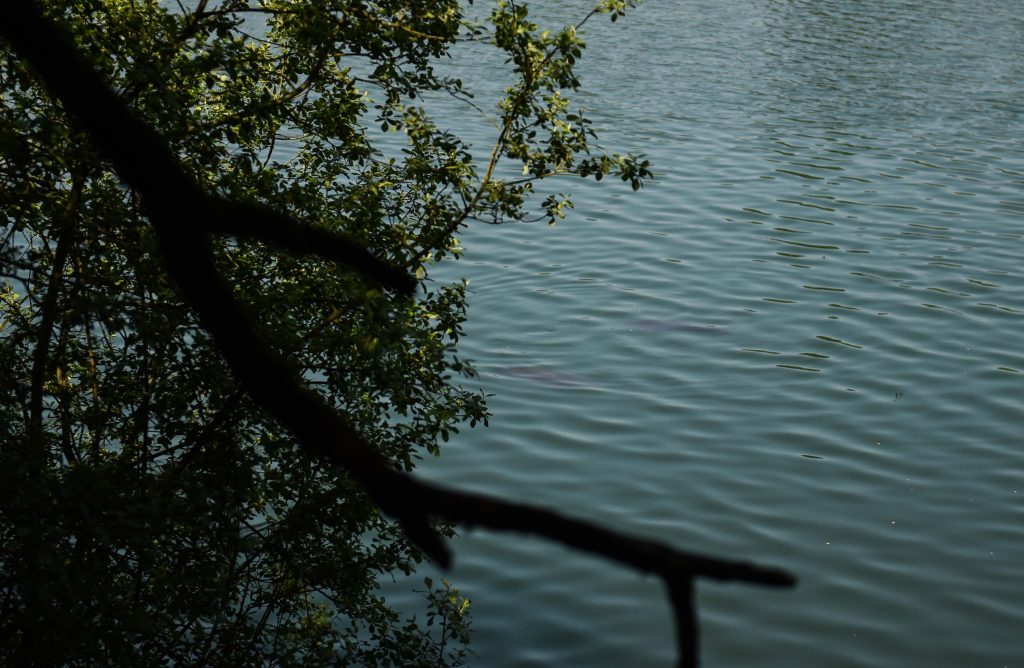 A Stealthy Approach Pays Off

The fish can be cautious in the margins ,though, so ensure that your rig is as concealed as possible. Use fluorocarbon lines and hook links complete with a rig that they will find hard to eject.

An ultra sharp hook is a must, you will be amazed how many times the fish can get away with it if it isn’t.

I couple this with a heavy, drop-off inline lead of around 3-4oz because they find these very hard to deal with too. If you are finding the carp hard to hook, try shortening down the hook link.

Whittle down your hook bait, because they can even overlook a standard round bait on their day. Chopped nut hook baits and sweetcorn stacks also work really well as hook baits.

Just ensure that nothing is too blatant.

If the carp are out in the pit, which will be easily identified as they crash out the water, bow wave and bubble etc, a zig-rig can really pay dividends.  They reveal themselves regularly so keep your eyes peeled to the water as much as possible.

I find that early morning and late evening are the prime times for active carp.

When they are showing over the depths, up to 30ft in places,  particularly when it is warm, a suspended bait can be absolutely deadly. I do this in the form of a zig-rig.

Due to the deep nature of the pit, the best way to present a zig-rig is on an adjustable float.

This allows you to search the depths and be ultra precise in where you want to present your hook bait.

I like to target them at half or three quarters depth reeling it down or letting the float up a foot at a time (which is marked on my fishing rods).

Zig-rigs also need to be inconspicuous, so I opt for 10lb monofilament as the hook link, as long as the weed isn’t too heavy. This is coupled with a sharp size 8 hook, to a zig aligner.

I have found black foam to be most successful at Woburn because it imitates any natural food that may be thriving in the layers of the water column. That said, it may be necessary to try other colours during slower times. 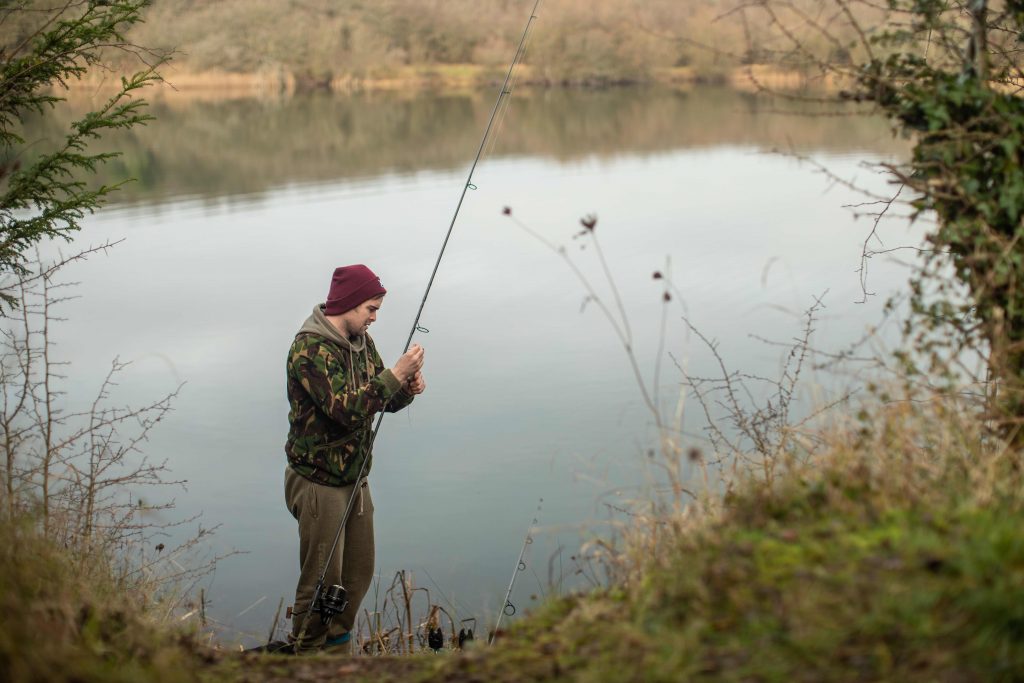 On calm, sunny days, fishing on the surface is probably the most enjoyable way to target the wily, Woburn specimens.

This isn’t a piece of cake mind you, it can be a real challenge, but a very satisfying one as you watch a carp slurp in your suspended mixer.

The Woburn fish aren’t shy in showing themselves on the surface.

You will notice them bow-waving with their backs out of the water, slurping down leaves and flies, plus showing.

Calm days are best, but fishing with the wind behind can be effective, especially if you add oils to your mixers to create a calm slick.

By fishing with the wind behind you can drift your mixers downwind, ensuring that your hook bait can be presented more naturally with no bow like it would be with a sidewind, or worse still fishing into it.

Always get them feeding confidently before casting out your float.

Just like when fishing in the margins, the Woburn fish spook easily so get them feeding competitively through feeding little and often first.

A mixture of floating pellet sizes helps; the smaller and the bigger ones, fishing a trimmed down pop-up over the top on an inline float. Feeding mixers over zig-rigs is also another successful tactic on Woburn! 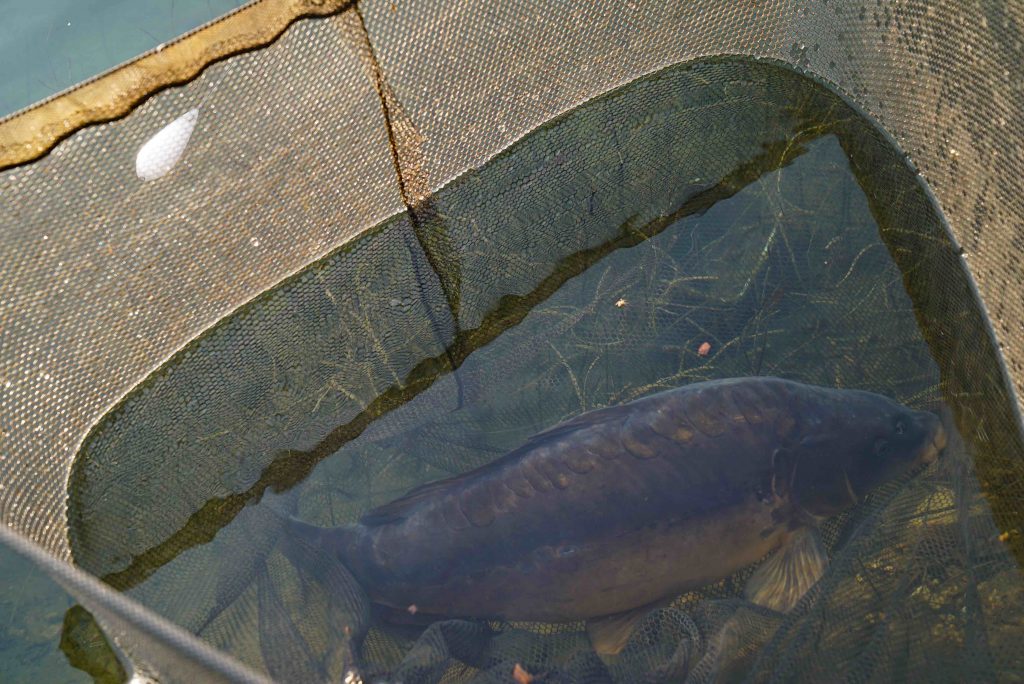 The lake doesn’t boast much in the way of features in open water, other than depth which is pretty uniform and marginal slopes.

There is a lot of low-lying weed present, so if you want to fish on the bottom I suggest a pop-up sitting on the weed, with spod mix over the top. Early in the season, the fish are very active and so will reveal themselves.

If this is the case sometimes a choddy over scattered boilies is an approach that scores.

I have done very well raking areas of weed too.

Get yourself a castable weed rake, find a sparser area and continually cast it to the clip on the reel, pulling in the same direction. The more you rake, the cleaner it will get.

Once raked, feed it with particles and before long you will encourage the carp to feed there regularly, creating a hotspot on the bottom.

There is a lovely area to the right of Clarkies which is a raised plateau. The carp will patrol here early in the season because it’s an area they gather to spawn.

They will often slip up on this plateau so never overlook it. It is also very clean so you can easily present a bottom bait here. 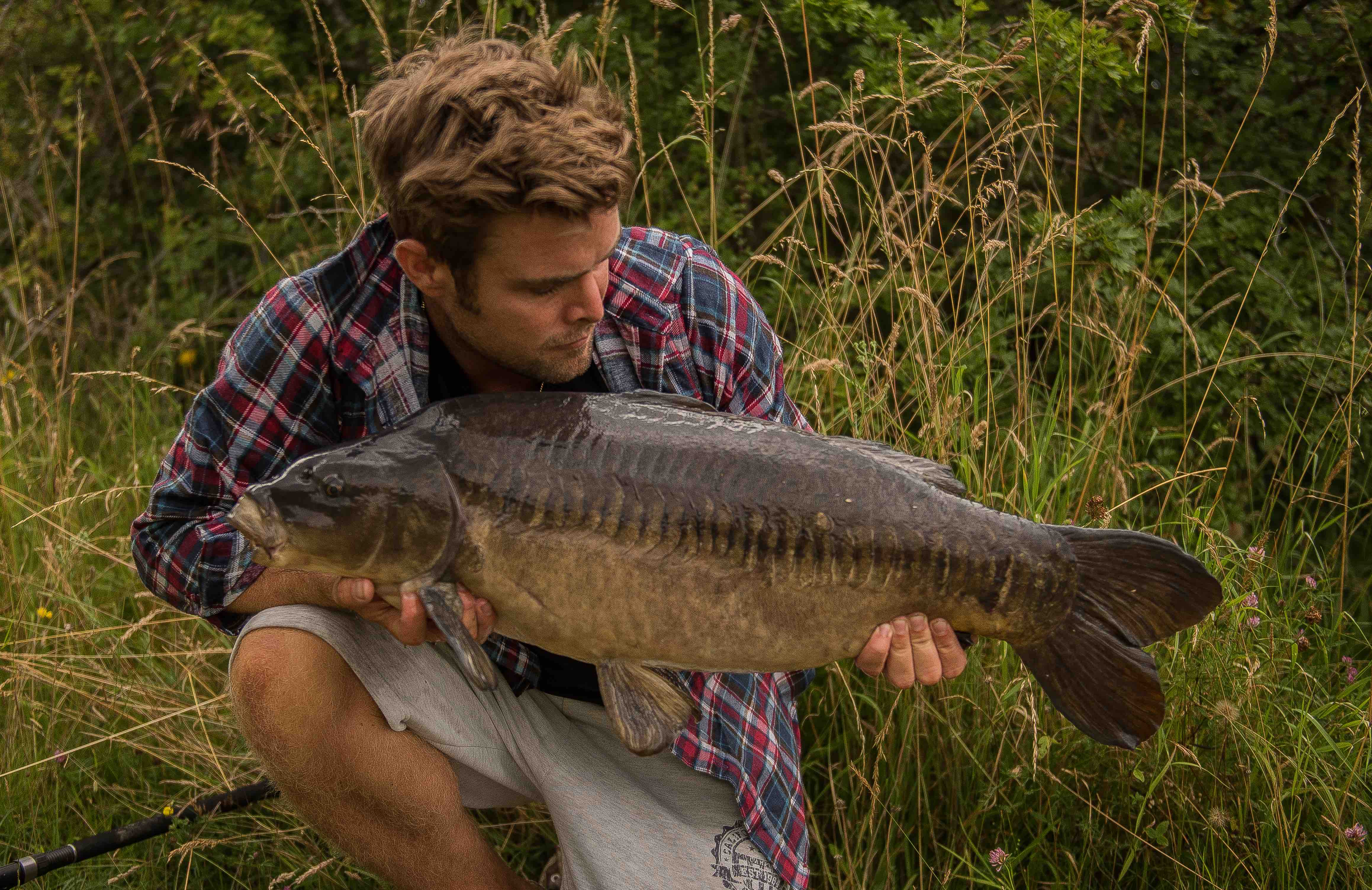 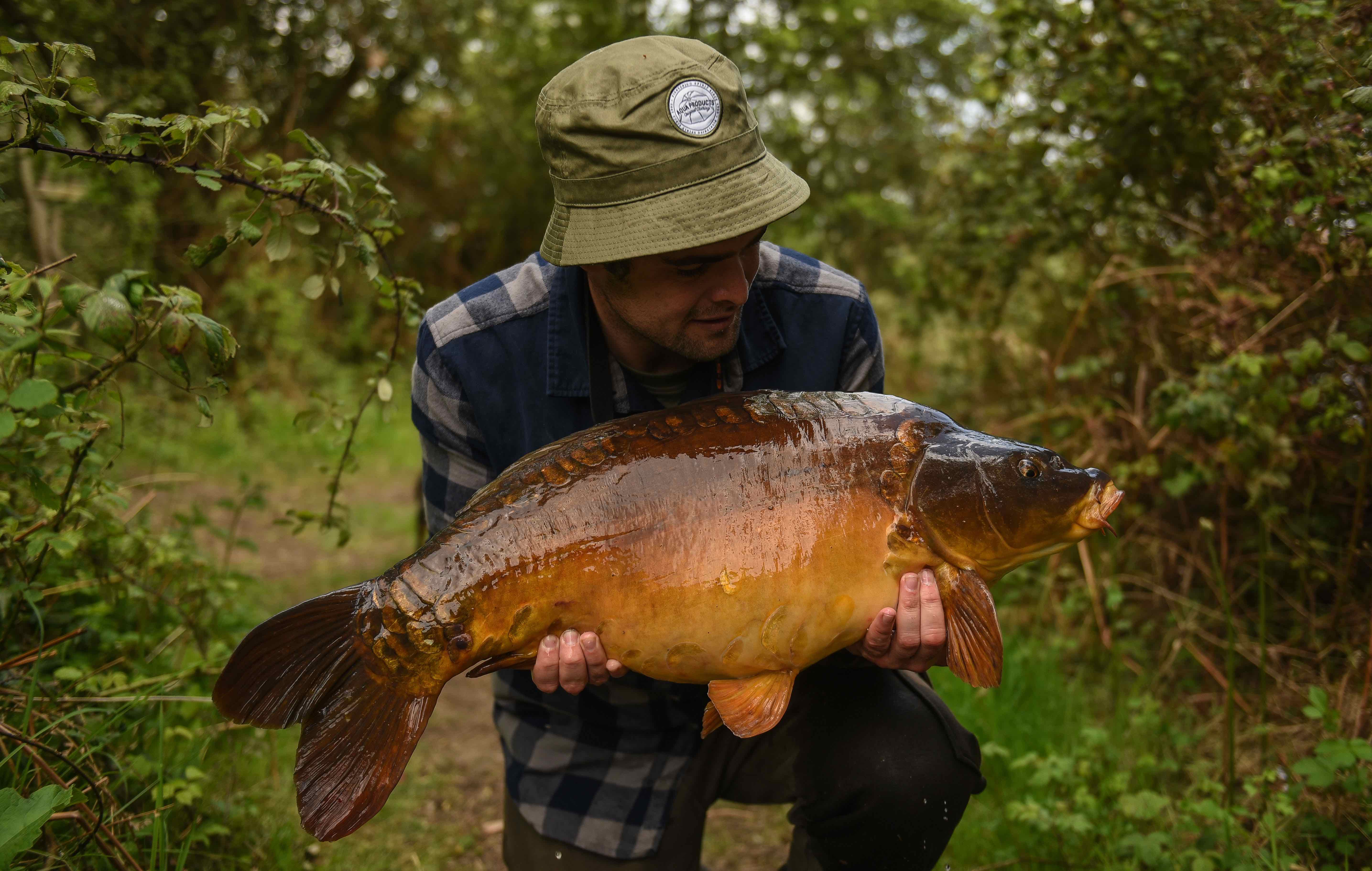 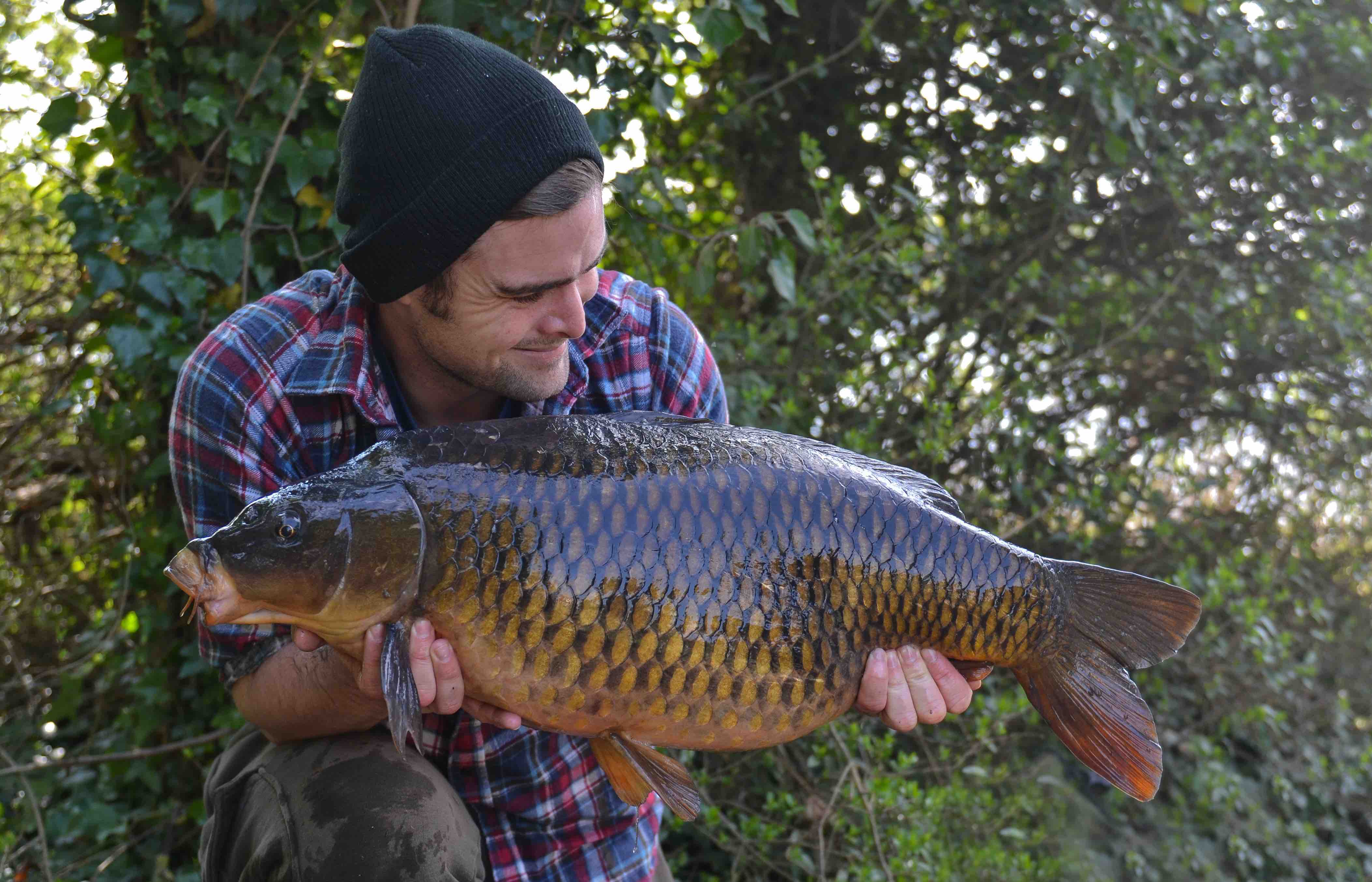 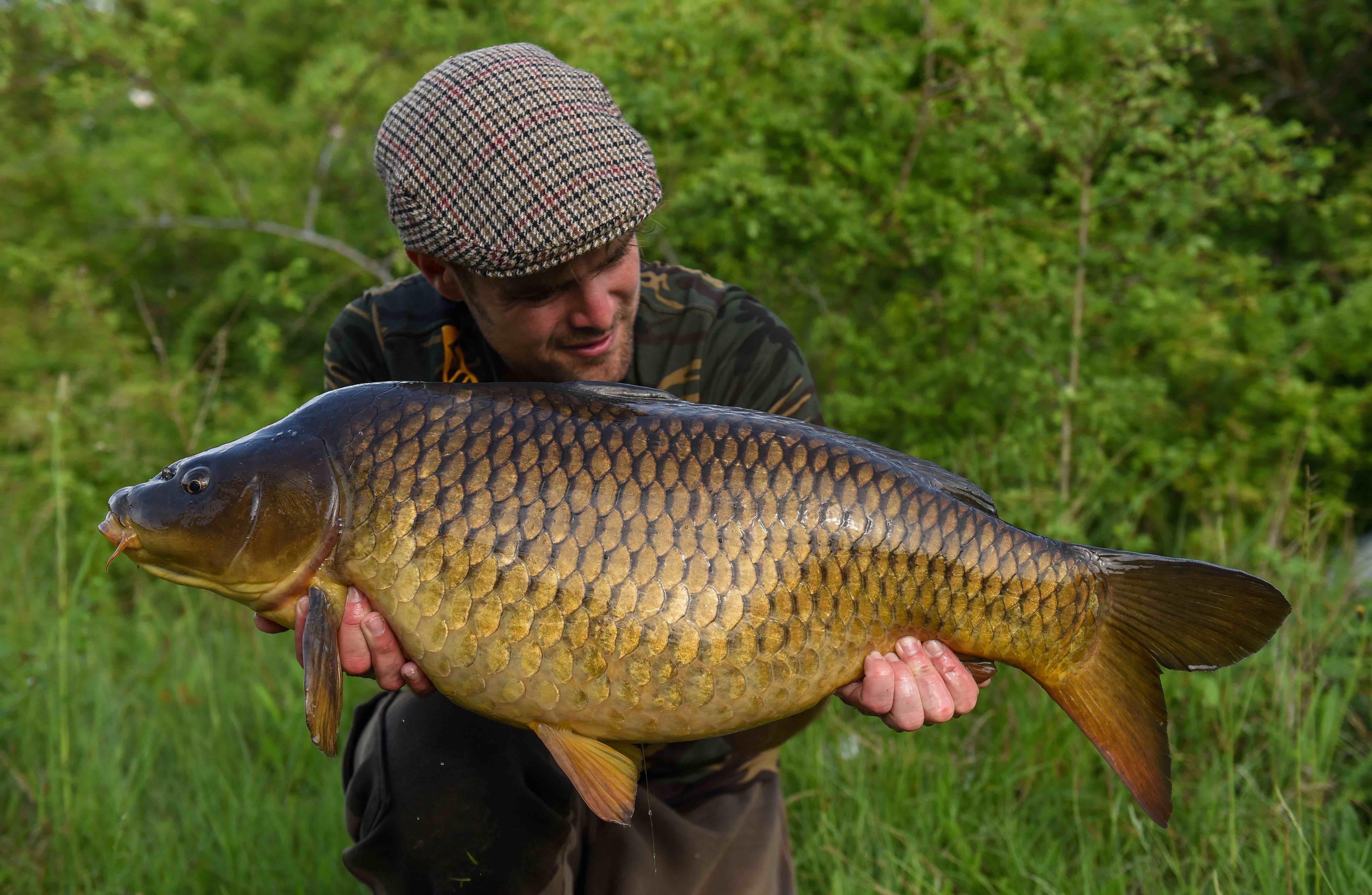 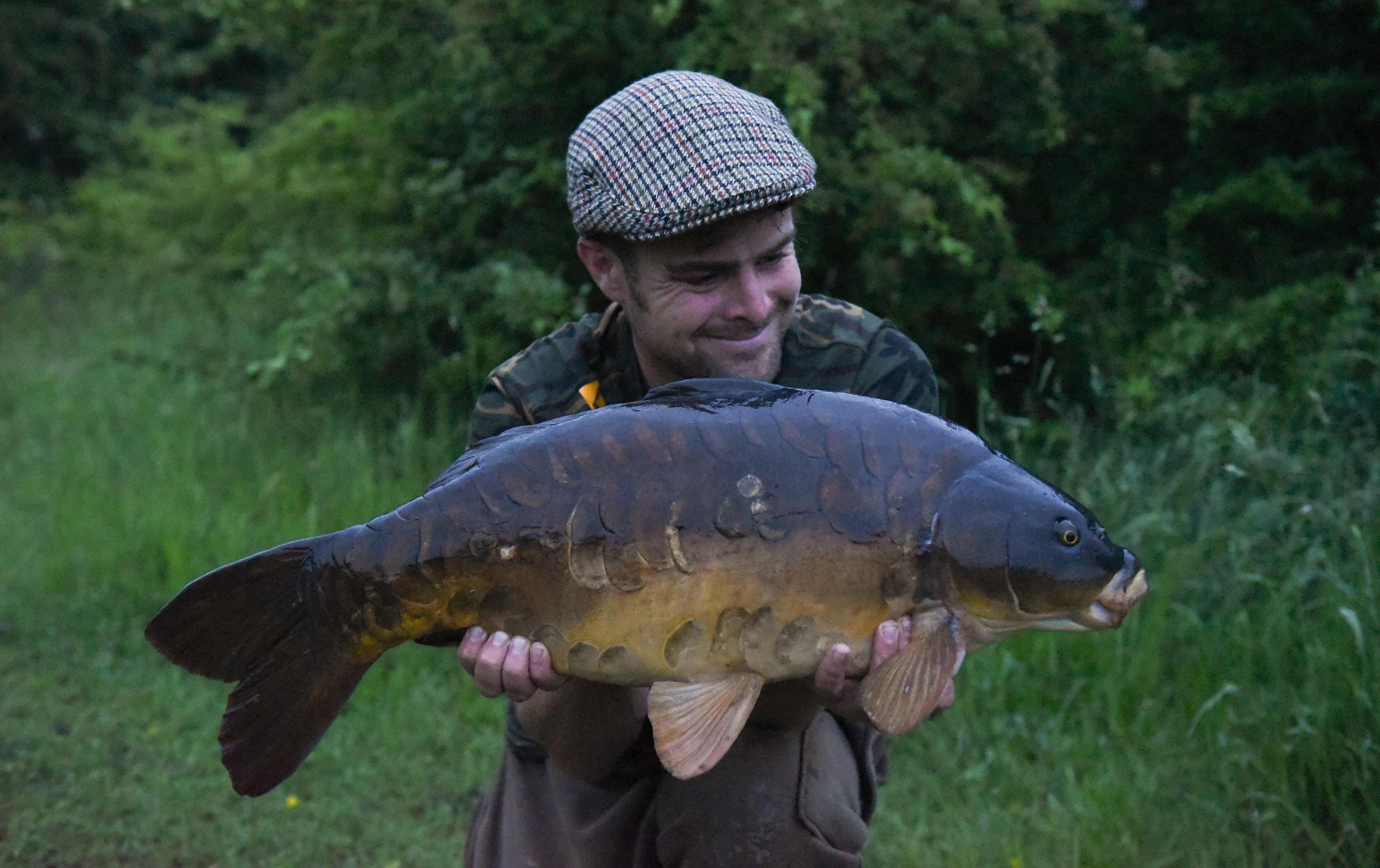 A very historic lake that lends itself to a number of exciting methods; surface fishing and stalking. There’s nothing better than creeping around the margins at Woburn trying to entice some of its scaly residents.

Value for money
Fish condition
Onsite facilities
Would you return