Manor Farm provides a stock that is a real box of chocolates. If you are after your first 20 or even 30, it's a great choice.

One of Linear Fisheries' jewels in the crown

Day ticket, syndicate or holiday booking: Day ticket
Realistic catch rate: Several fish are possible
How much: 24 Hour Tickets 1 Rod £11.50 2 Rods £24 3 Rods £30
Best swim(s): Varies
How do I get a ticket: On the bank or shop prior to fishing
Skill level to catch: Intermediate
How busy is it: It can be
Location: Stanton Harcourt, Witney
Can you drive to the swims: No
Best method: Varies depending on time of year
On site facilities: Shop, shower, toilets
Best bait: Boilies and particles
Nearest tackle shop: On site
Ideal fishing range: Varies from swim to swim
Average size: 20lb plus
Max realistic size: 45lb

Manor Farm Lake at approximately 14 acres is as mature as the adjacent St. Johns and just as popular. Manor was Linear’s original big fish water and although St.Johns took this title away for a while, Manor is now right back up there.

We estimate that the water contains around 700 carp which includes at least forty different thirties. During the last couple of years, five different 40lb plus fish have been landed from the water. The lake records stand at 48.13 for a mirror, 35lb for a ghost carp and 36.08 for a common, all caught in recently.

Plenty of back up fish in excess of twenty pounds along with numerous upper doubles are present. Linear’s stocking policy on this water is on-going with a low number of selected, fast growing carp being introduced whenever necessary.

When I was at school I used to read about the exploits of the likes of Dave Lane, Chilly and Terry Hearn fishing Manor Farm on the Linear complex.

You’ll need these for your trip to Manor Farm! 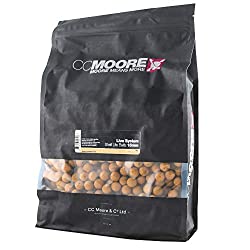 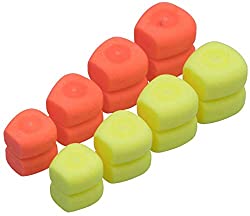 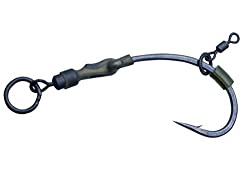 History behind you fishing there, why did you chose that lake?

When I was at school I used to read about the exploits of the likes of Dave Lane, Chilly and Terry Hearn fishing Manor Farm on the Linear complex. Most were targeting a once famous fish called Cut Tail, as it was one of the biggest fish in Oxfordshire at the time.

As soon as I had passed my driving test I was straight up to Linear but started out on St.Johns as it was the easier of the two venues.

Manor was a challenge and didn’t contain the numbers of fish that it now contains.

On one such trip to St.Johns, I had done a couple of nights for just two fish when suddenly I felt like I may as well be on Manor fishing for a bite rather than struggling for a bite on St.Johns.

I packed up and started to carry my gear via multiple trips from the point of St.Johns round to Manor.

I never had a barrow back then and there was an active gravel workings between the two lakes so I had to walk all the way round the back of manor to and settled on the road bank peg four.

I ended up catching a few fish that trip and on my second night on Manor I was fortunate to bag Cut Tail, the biggest fish in the lake and a fish I had read so much about. It was there and then, August 1st 2003 that I fell in love with Manor.

It would be very hard to guess exactly how many fish are in Manor. I remember in the floods of 2008 the stock pond flooded into Manor and the majority of the small stockies escaped into Manor. I was catching them at around 6lb the following year. Those fish have hammered on the weight and many of them are well over the 30lb mark now.

If I had to guess I would say there is in excess of 500 carp in Manor with a lovely balance of all sizes, shapes and scale patterns.

The king of the pond is an incredible fish called Kempies Linear which is nudging 50lb now and there are a number of back up forties including Spike, The Pretty One, Mr Ridiculous amongst others. I would say the average size is around 25lb with around one in five fish breaking the thirty pound mark. 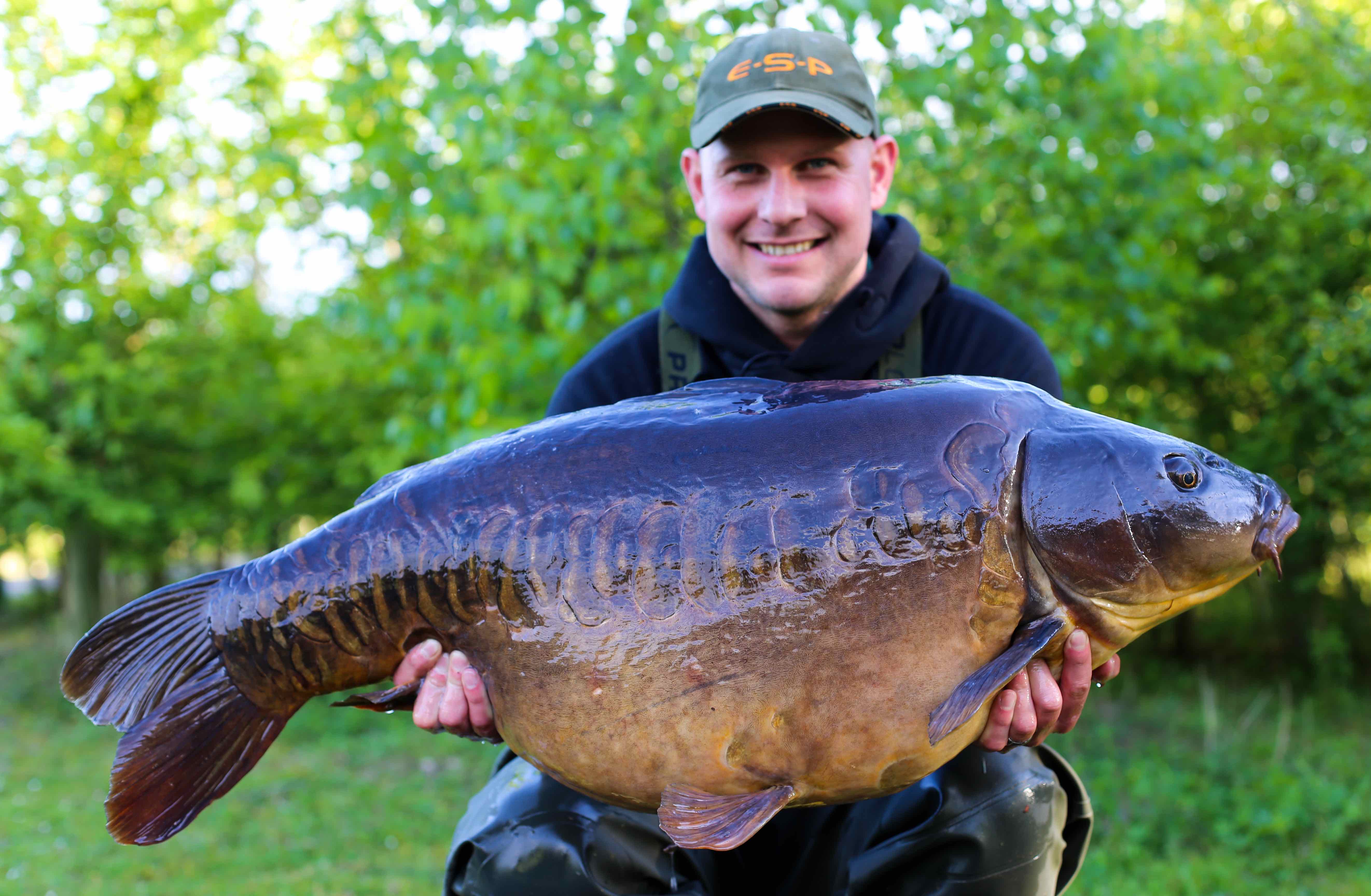 The lake is around 18 acres in size and has matured nicely over the fifteen or more years that I have been fishing the venue.

The swims are well maintained and custom built making them nice and tidy, clean and flat.

There is lots of open water fishing as well as some carpy tree lined margins, small reed lined bays and a no fishing bank where the carp love to hang out. You are unable to drive to the pegs although there are three swims near the car park but the rest of the swims will require a barrow. 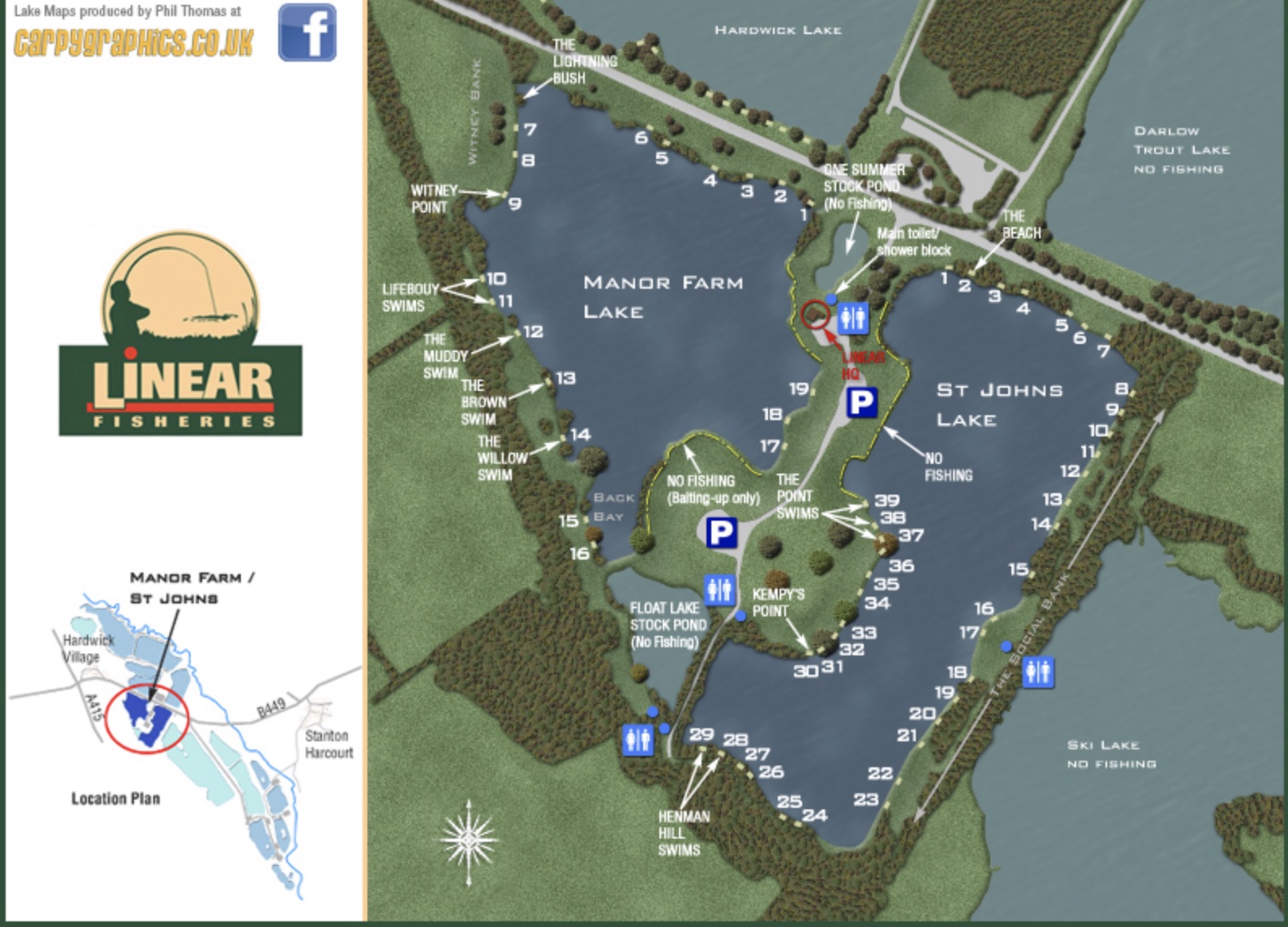 How do you settle on a swim? What are the best swims and what features do you target in them?

The fish do move around a lot on the venue and over a 24 hour period it would not be unusual for the fish to be in front of most areas in the lake as they do a circuit. Manor farm is absolutely packed with features. Starting on the road bank, the water is around 14 foot deep and is mainly fairly weed free and silty.

The lake does shallow up to 9ft deep the further along the road bank you go. Peg four is a favourite of mine as it starts to shallow up here and the swim looks down the centre of the lake and commands plenty of water.

The Witney point over on the far side is the longest walk but I have often found fish here in close in the summer where I have caught quite a few off the top. There are also some nice spots in close and they do get in the small bay to the right of the swim when the weather warms up.

My favourite swim on the river bank has to be the Brown Swim as it commands so much water.

The lake is around seven foot deep across the majority of the swim. Because it is shallower than the road bank it does get a lot more weedy in the summer.

There are some incredible spots in front of this swim at around 100 yards range. There are also a couple of clay humps that come right up off the deck to just two foot below the surface which carp love to patrol.

Another fantastic swim is the Willows swim which is next to the Brown swim and cuts off the entrance to the back bay. The far bank in a no fishing bank and the carp use the far margin to patrol in and out of the back bay.

You can walk round to the no fishing bank and peer into the crystal clear waters and see some of the lovely clear spots and it is not uncommon to see some of the big old girls waddle past right below your feet.

The car park swims are popular not only because you can park fairly close to the swims but the swims themselves have some incredible features. You can fish the back of the clay humps that are also fishable from the Brown swim.

There is also a shallow bar around 90 yards out in front of the right hand car park swim and this area does plenty of fish, particularly when there is a banging south westerly wind.

Where is best in winter?

The fish always head for the deeper water off the road bank in winter. Pegs 3, 4 and 5 are the most consistent in producing bites both on the bottom and also on zigs.

Where is best in summer?

The road bank still produces during the warmer months but the fish spend far more time further up the lake where there is less depth and more weed. Areas like the Brown Swim, Willows and the car park swims are my favourite in the summer but the fish really can turn up anywhere.

They especially like to get on the end of a fresh warm wind and the warmer it gets the more chance you will start seeing them moving into the bays in numbers in the day times. 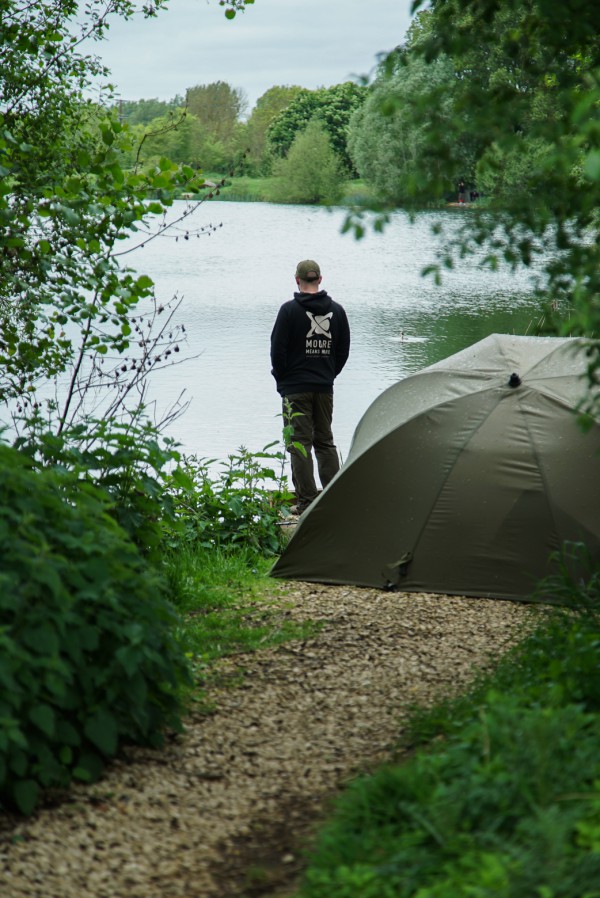 What’s the best tactic in terms of rig and bait?

Zigs score really well off the deeper water of the road bank during early spring as the fish start to wake up.

As soon as the water starts to warm up, normally towards the end of March and into early April the fish really do love a tightly spodded baited area of particles and 10mm boilies.

I have had great success by keeping it simple by using hemp, sweetcorn and 10mm CC Moore Live system boilies.

Ronnie rigs with a 12mm yellow Northern Special pop up over the top has always been a banker and the fish are a sucker for double plastic sweetcorn. 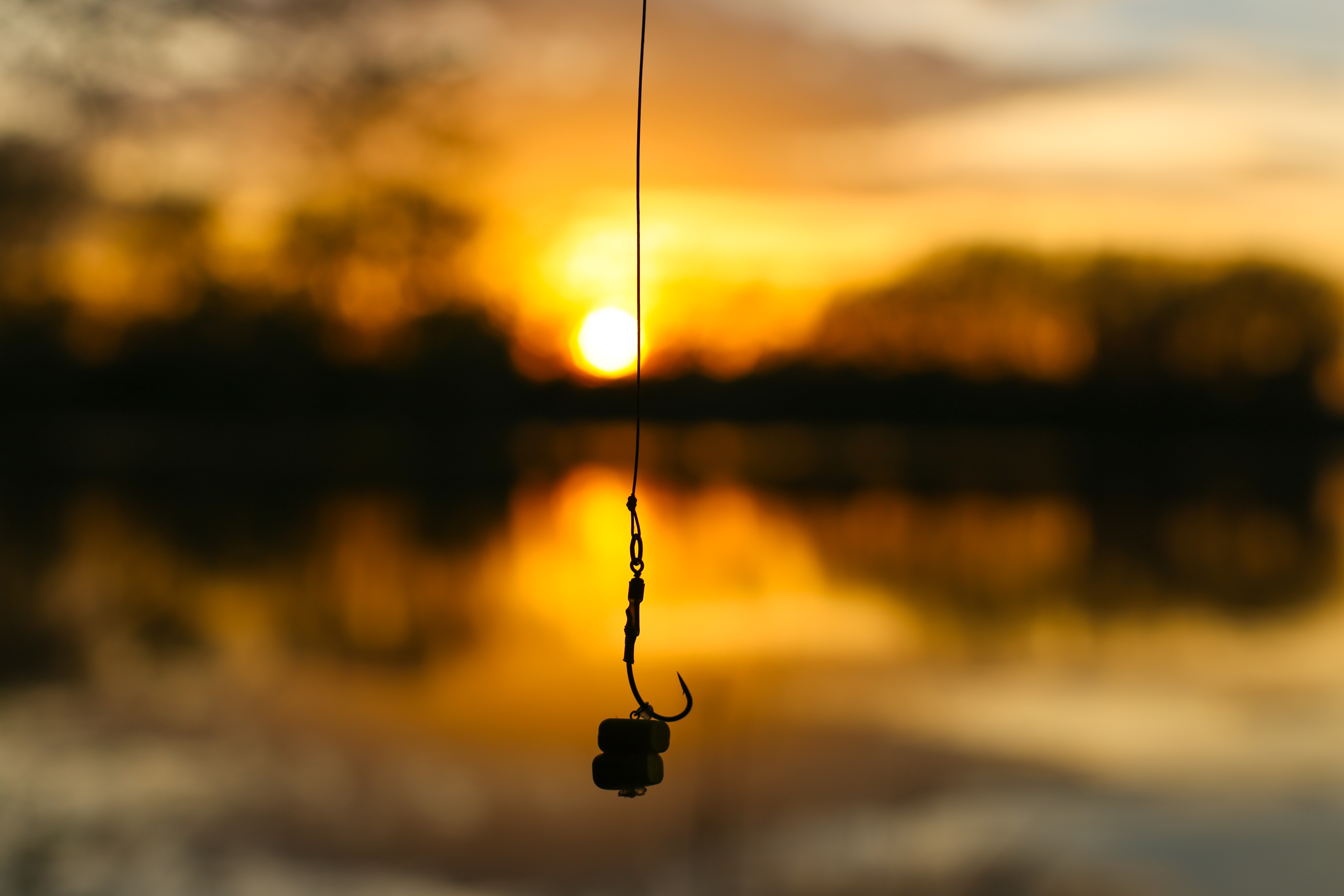 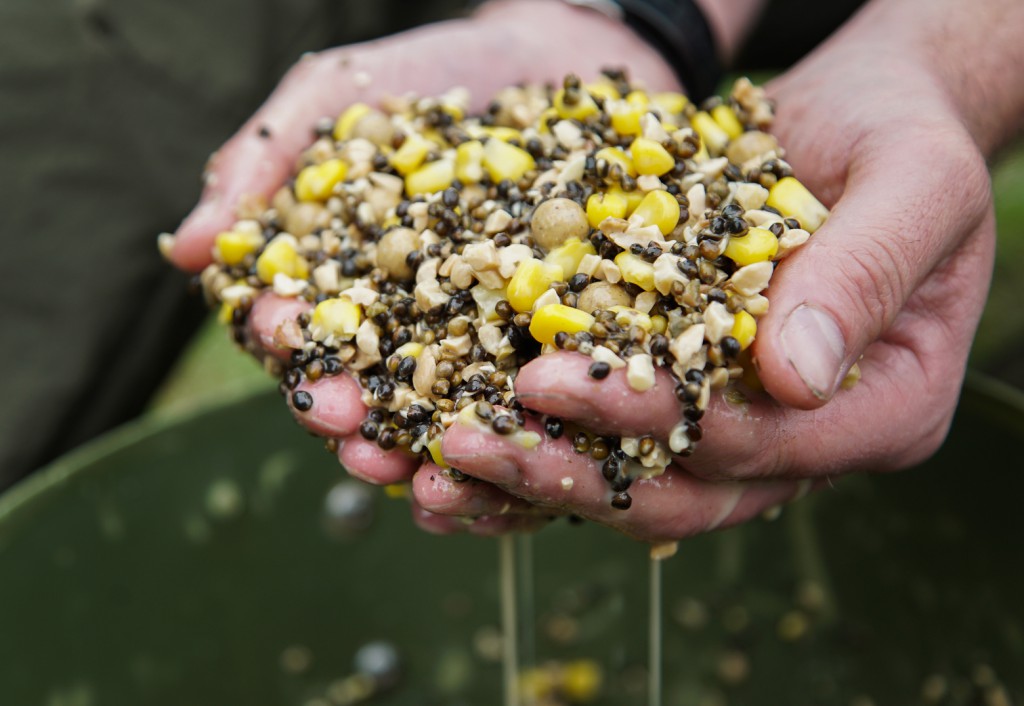 The best advice I could give anyone is to use a marker rod to find the clear spots. The lake can get quite weedy and the clearer areas are quite often polished off due to carp feeding there on a regular basis. They are the best spots to present a bed of bait. 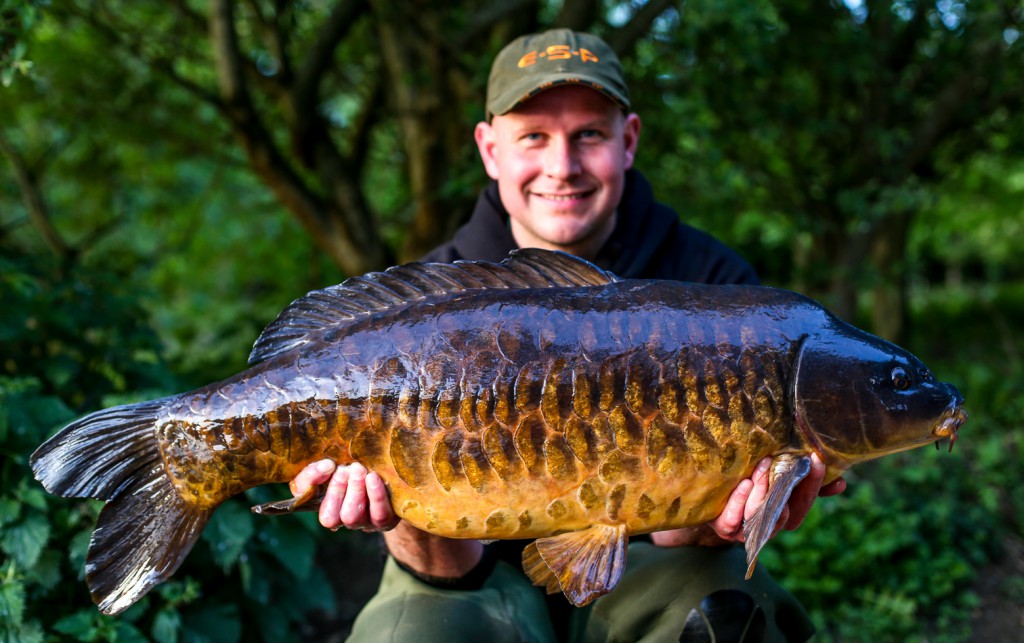 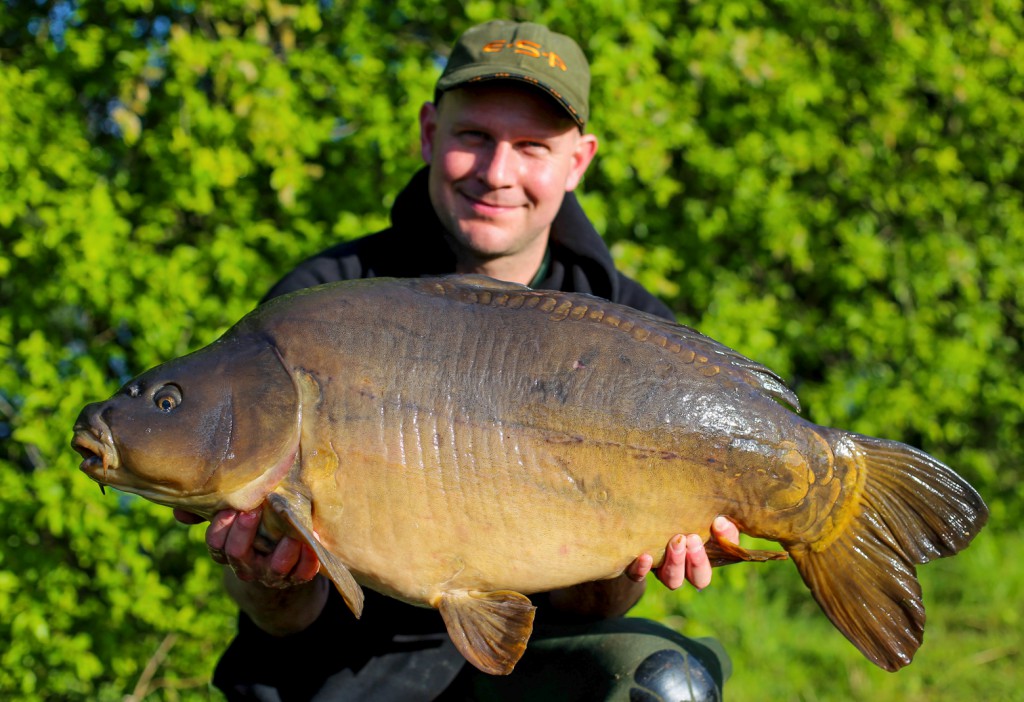 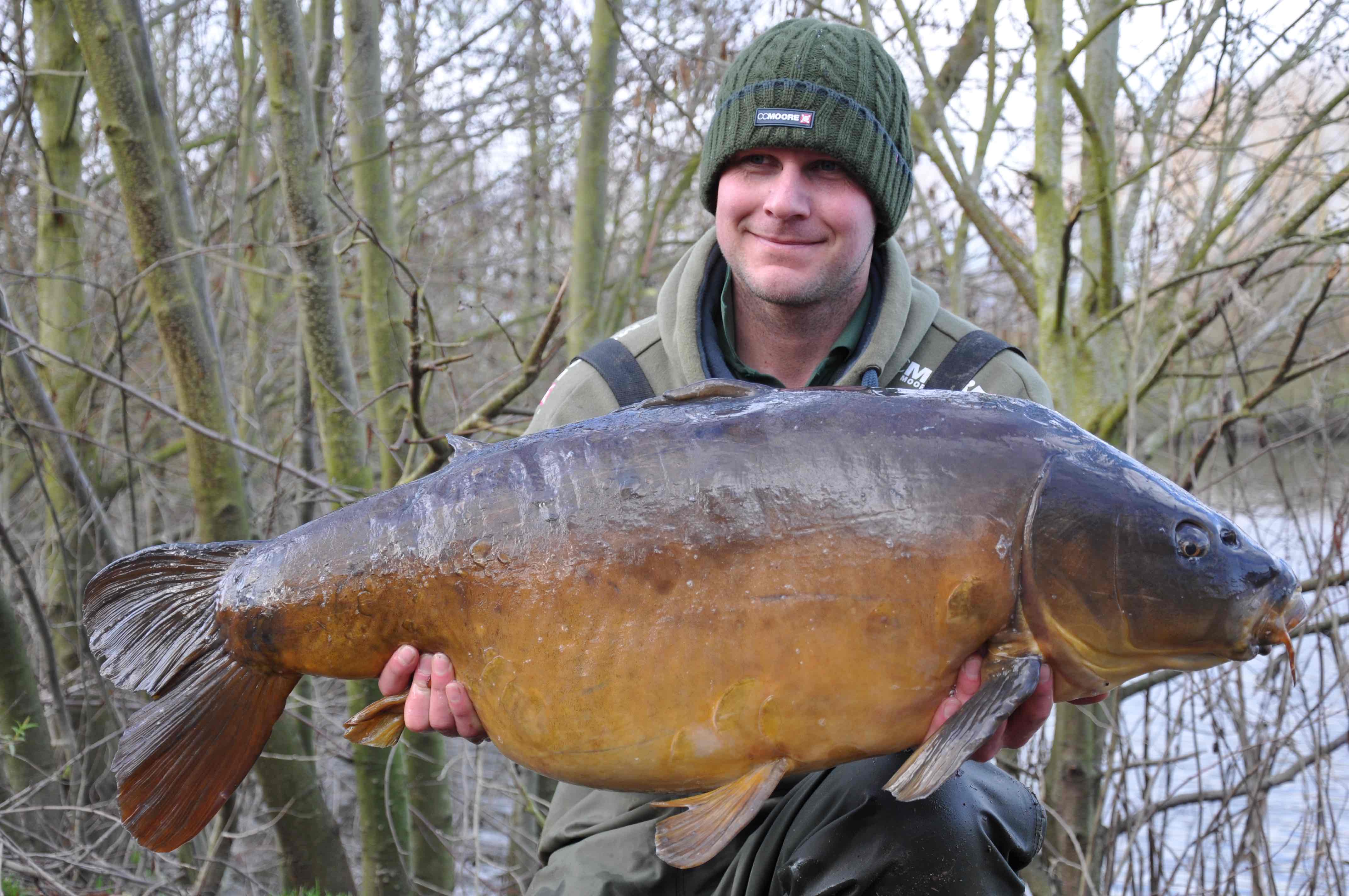 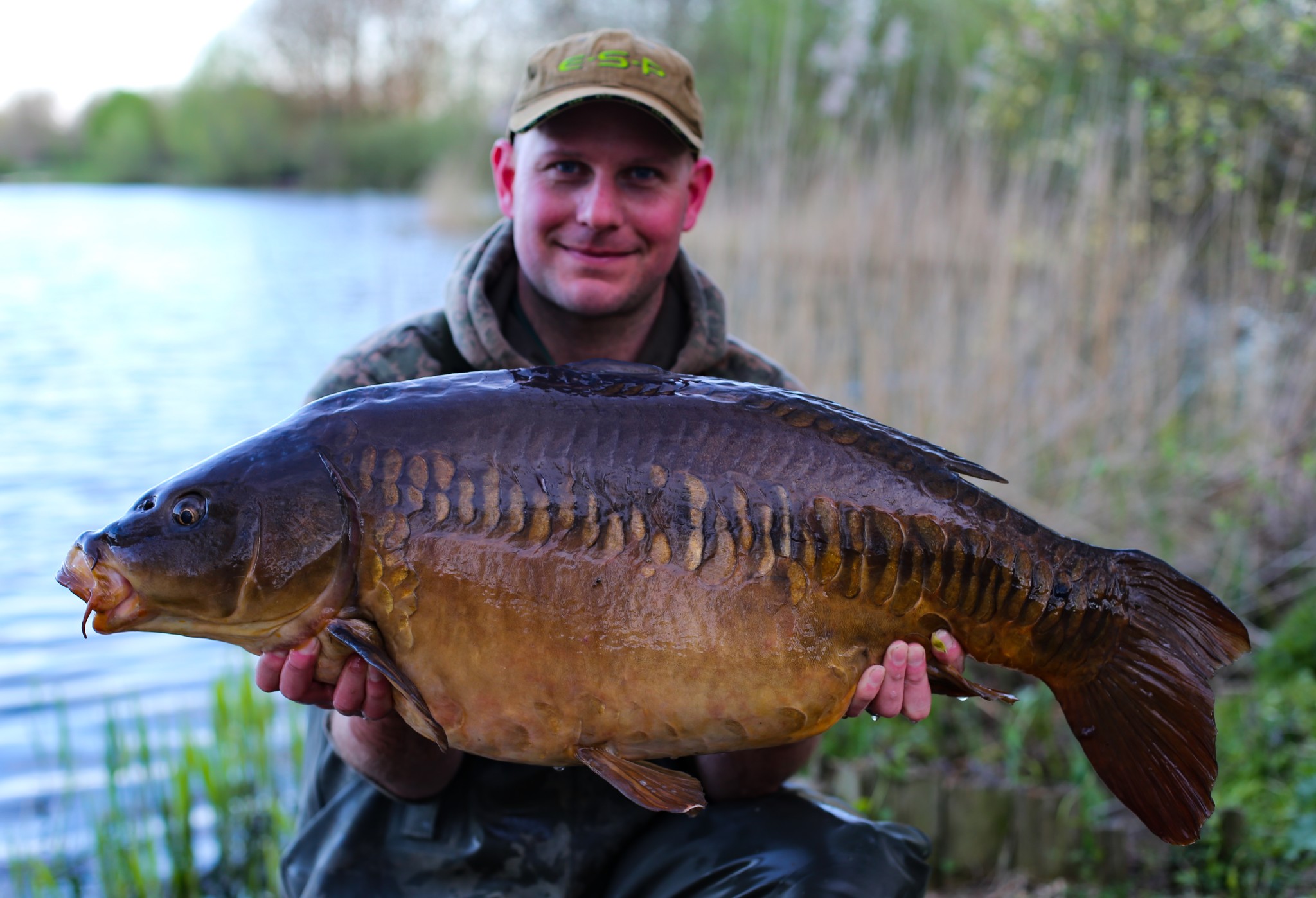 Catch & release only?: Yes!
Are there swim boundaries: You must stick to your swim
Are mats provided?: No
Are bait boats allowed?: No
Are boats allowed?: No
Bait rules: Particles must be prepared properly, maggots as hook baits only
Hook pattern rules: Any pattern
Fish care rules: Unhooking mats compulsory
Parking rules: Dedicated car parks , no parking or driving on grass
Rig rules: Safe ones , barbed or barbless
Can I use spods/spombs?: Yes
How many rods?: Three
Are dogs allowed?: Yes, under control on a lead
Is there an age limit?: Under 16's to be accompanied by adult
Can I use particles: Yes, if prepared correctly

One of my favourite lakes of all time that I really reflect on with such fond memories.

Kev Hewitt is regarded as one of the most consistent carp anglers in the country. An angler that can adopt an array of tactics, Kev is particular successful on well-known day ticket waters.