Targeting large perch on the beautiful rivers and canals.

Read all about my recent perch fishing exploits from the wild rivers, to the mysterious Grand Union Canal.

Perch fishing makes me feel like I have discovered fishing again.

You know the feeling when you first begin angling; everything is a surprise, everything you hook sends your heart racing with anticipation, actually making you anxious with what you could be attached to.

I only get that in carp fishing on very, very special venues these days (it’s a feeling that’s hard to find), but with perch, big perch, I seem to feel it all the time and so this winter carp fishing has taken a backseat to allow me to target these impressive, prehistoric looking creatures. 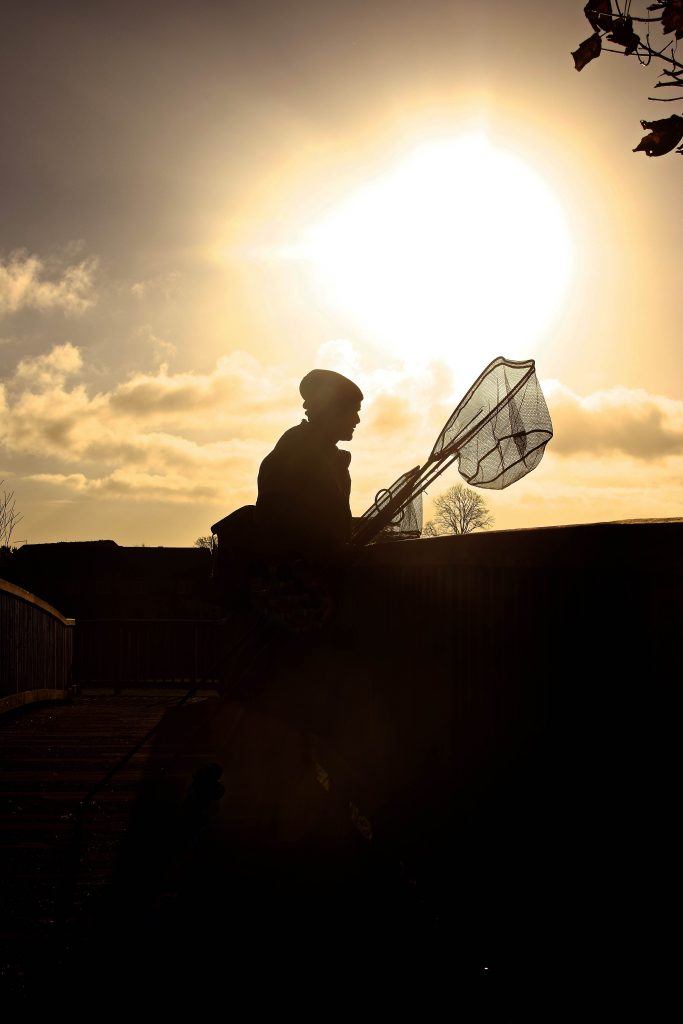 Perch are a belligerent, angry species, with attitude. You don’t find big perch everywhere, they require hunting down and it’s this part that I really enjoy.

It’s like targeting big carp, but on a river.

Walking miles upon miles of river in search of them requires dedication, patience and a lot of perseverance. Big perch thrive on neglect, so it pays to search every part of the river you may be targeting, watercraft is key.

Look for deep, slow-moving parts of the river, snaggy overhangs, bridges, locks. Keep an eye on the river too, look for shoals of bait fish, if you can pinpoint them, predators won’t be far away. 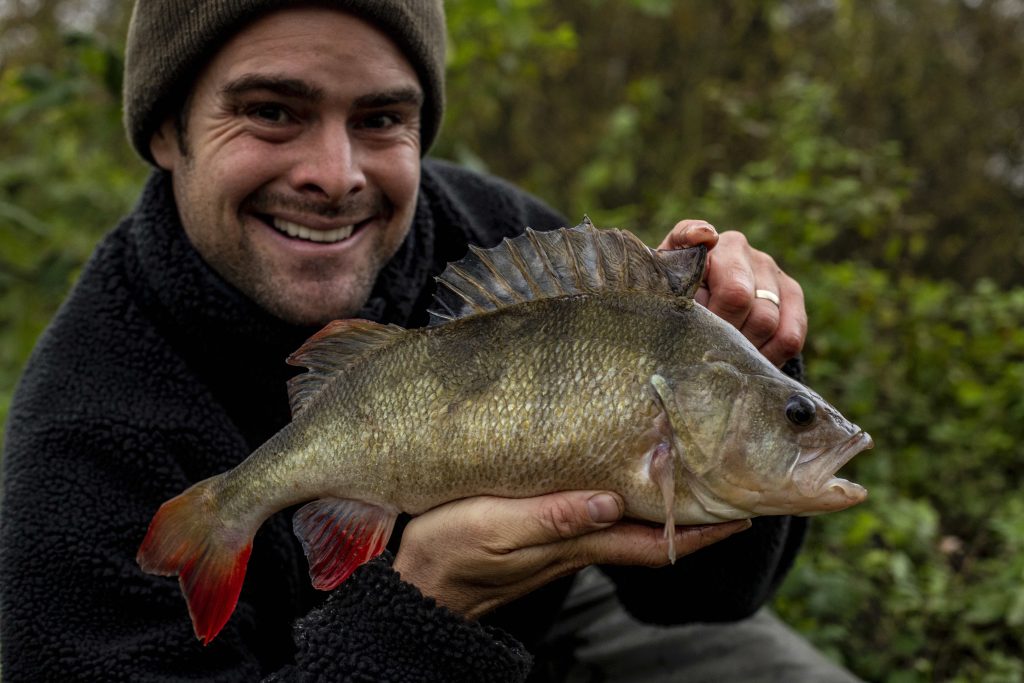 My perching season began back in November time, once I felt that the carp had shut up shop on my large park lake.

Due to the rivers carrying a shedload of extra, turbid-coloured water, I opted to begin on the canal over in Bedfordshire.

Once the clarity goes in the water, the perch can be very hard to catch so the canal was really the only option as I didn’t know any local lakes containing big stripeys.

Anyway, I had been tipped off by a couple of pals that fished the cut, and so soon dusted off the quivertip rods, collected some bait from Browns Anglong and was soon wandering over the footbridge in search of stripeys.

The stretch in question is pretty featureless really and on first impressions by many, it would probably be overlooked. The odd boat and overhanging bush on the far bank was the pick of the features really.

However, I had some good information from a couple of pals, so I knew that they were there. The stretch does contain a heavy amount of silvers and with such a regular, easy food source, the perch would be there. 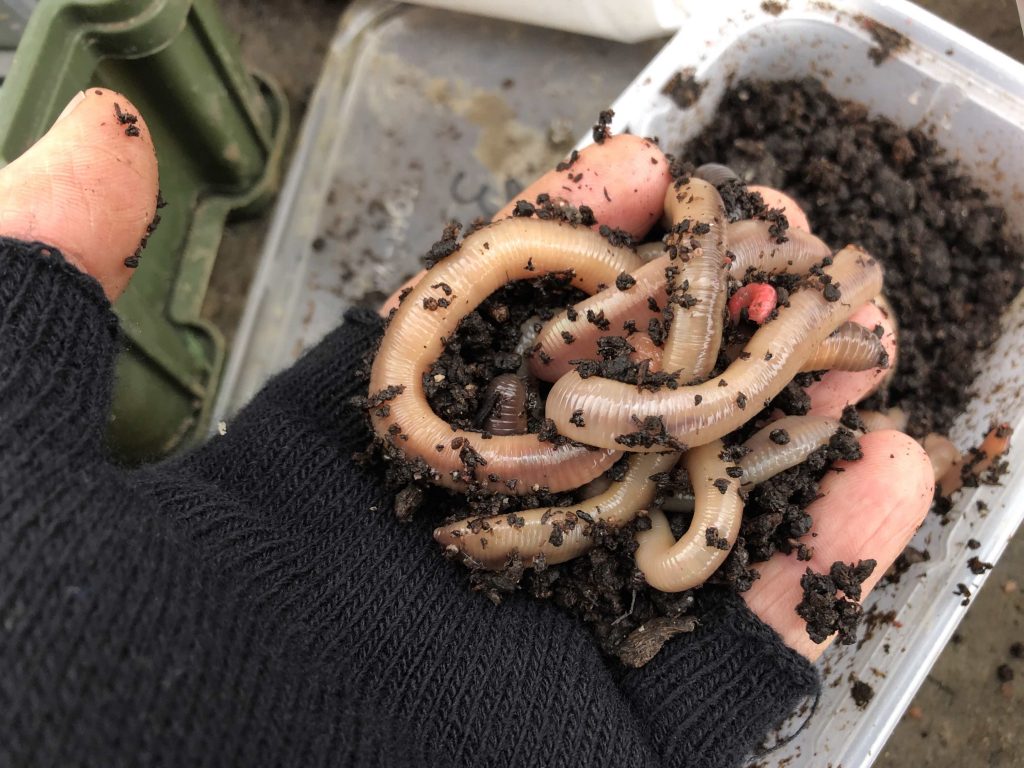 I small micro swivel, with three SSG weights attached via an inch of fluorocarbon was slid onto the line, running rig style.

I squeezed on another small shot to buffer this and left around 10in of line to which I tied on a size 6 Ridgemonkey Beak Pointed hook. It’s this that I would attach a large, juicy lobworm to. 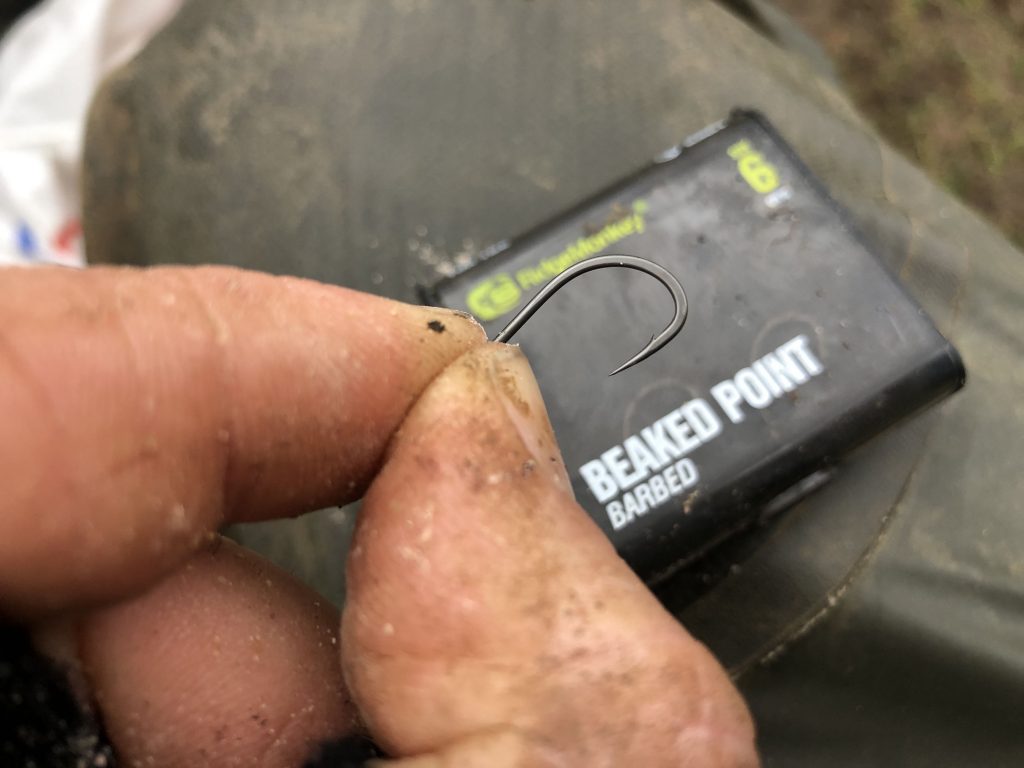 I personally like to use the lightest weight that I can get away with when perching. They don’t like resistance and so the lighter the better. I employ a nice big, sharp hook too, barbed to keep the worm on the hook.

Perch have large, hard, boney mouths, and they fight extremely scrappy, shaking their heads savagely from side to side, so a big, sharp hook is key.

I had a pot full of lobworms, and some maggots also in my armoury with the plan to fish one tip down the edge towards a moored up boat, and the other halfway across in the deeper drop off, spraying maggots over the top of the worms every 10 minutes or so.

The first drop in and I began to receive twitches and tugs on the tip, before it pulled round aggressively.

The result was a fish of over 2lb and a fantastic start to my campaign for a winter 3! Over the next few weeks, I was to experience a wonderful few sessions on the canal catching fish to within ounces of the magical 3 mark, but nothing bigger.

During my canal campaign I was itching to get back on the rivers and eventually, they fined down enough to target them. Rivers always hold the bigger fish! 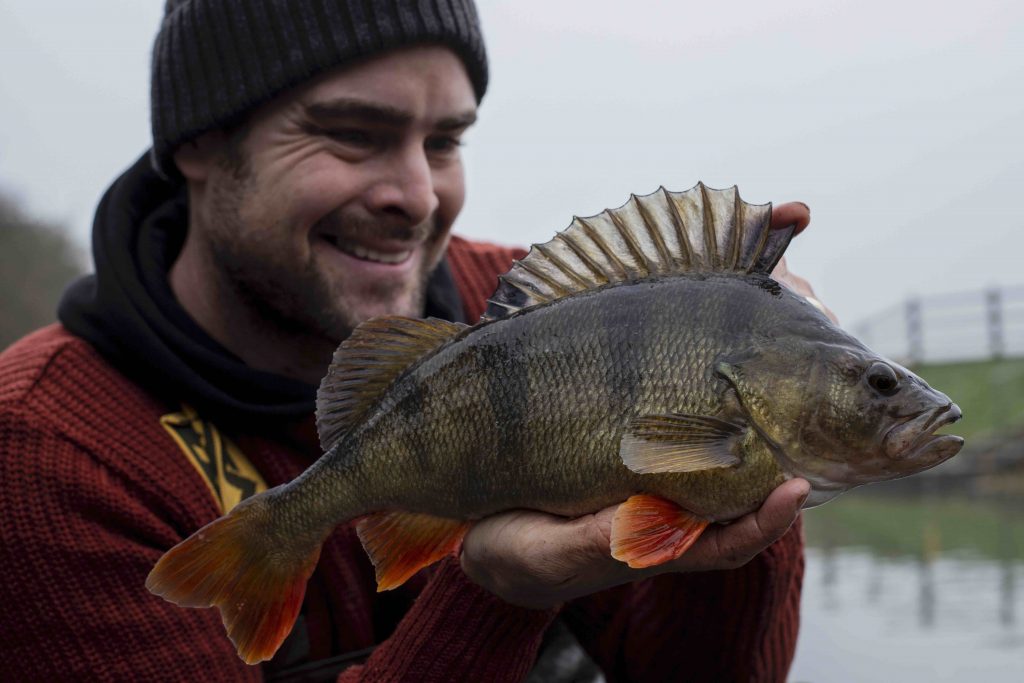 I had decided that my main focuses were to be on the Nene and also the Ouse.

Two rivers that are renowned for producing monster stripeys. The water levels had dropped considerably and they had cleared up, so my initial approach was to go with livebaits and lures.

My first session was on a deep lock on the Nene.

The turbulent, foamy water pumped down through the lock, leaving a beautiful, deep, calm area, which screamed out predators. Every few minutes, the surface of the water would flicker with silvers that were no doubt being chased by the ferocious predators of the river. I knew I was onto a spot! 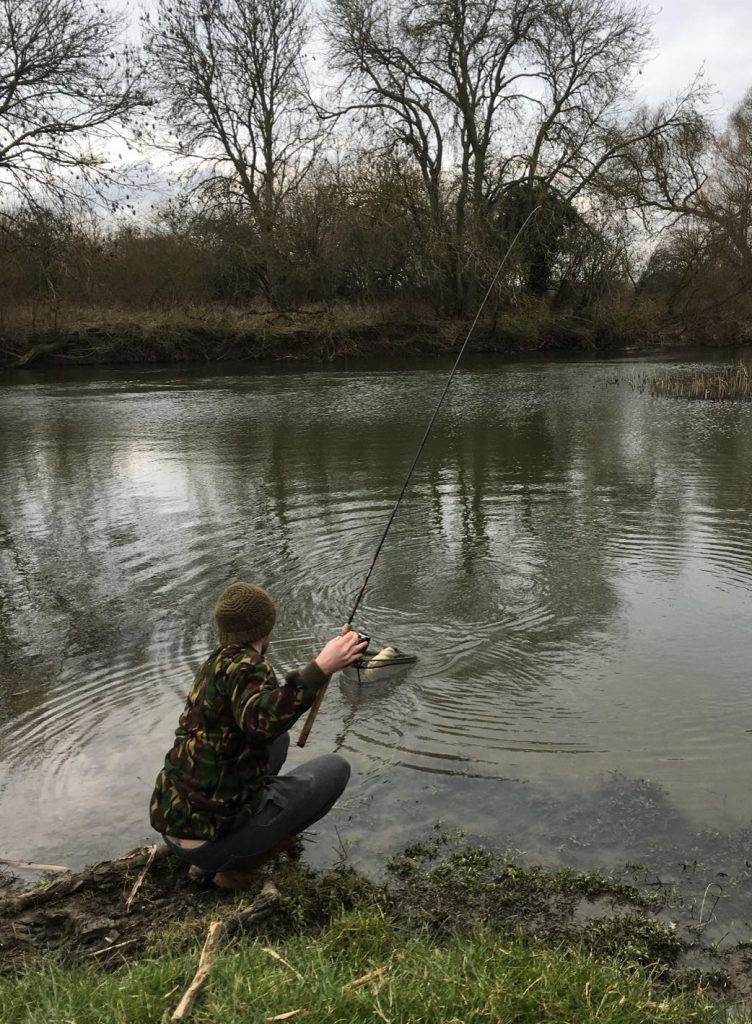 Using a light whip, I began swinging in the perfect sized livebaits – roach around 2in-3in in length, ideal for the perch.

I soon had a bucketful and it was time to rig up. Using a simple, what could be described as a type of helicopter, float leger-style presentation, I soon had a livebait working hard in the mouth of the lock.

The float was drifting around slowly, bobbing every now and then as the live bait worked hard around the area.

Then, it bobbed positively, then again, before pulling away beneath the surface. A slow tightening of the line and I struck firmly to resistance. A decent battle ensued and I slipped the net under a wonderful perch just under 3lb – 2.13. 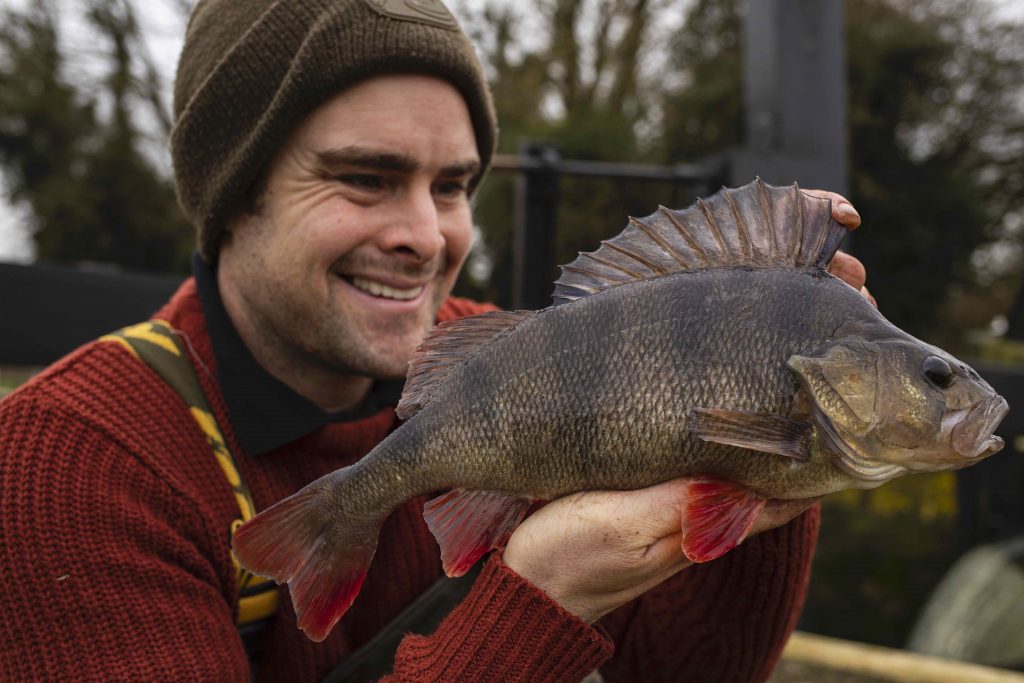 This area was to be my main stay for the next few weeks and both my friend Brad and I received some awesome action, catching large pike to 15lb and perch to just under 3. I still couldn’t manage that fish over the magical mark though.

My personal best is a beast of 4lb 2oz and so that would be the fish of a lifetime.

I flitted with my perch fishing the next month or two catching several incredibly beautiful specimens, another hatful of fish up to 2.15!!!

Yes 2.15. So I’m yet to catch a 3 pounder this year, but I am determined and will be straight back on the rivers as soon as they are back to their normal levels.